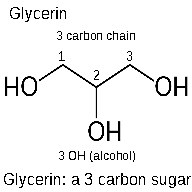 - composed of a 3 carbon glycerol, 2 fatty acids, a phosphate group, and a polar molecule

- serine replaces the glycerol as the backbone 3 carbon chain

- segment backbones of 3 carbon chains, either

one fatty acid, is replaced with a phospho group

complex and interconnect
- 2 types of phospholipids

- both types expand larger than a triglyceride through phosphorus bonding

The phospholipids are important components of all cell membranes, internal and external.

The lipid that forms the framework of the cell membrane are phospholipids.

The ratio of hydrogen and oxygen are always the same as water in a carbohydrate.

In a lipid the hydrogen to oxygen ratios are not the same as water, hydrate as in carbohydrate.